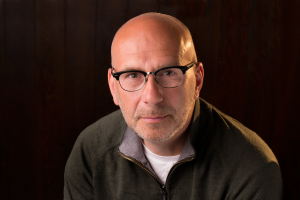 Simon studied journalism as a degree course at the University of Westminster in London in 1985. He got his first job in the London bureau of ABC News soon after graduating. His first big story was the downing of Pan Am 103 over Lockerbie. The collective effort required to cover this tragic story made a great impression. The momentous collapse of communism and the fall of the Berlin Wall cemented his passion for world news.

In 1992 he left ABC to join Reuters TV. He was part of the news team providing bulletins to the UK’s morning news show GMTV. He developed his skills and judgement as a news editor and producer with spells back at ABC News, and then with ITN (Independent Television News). Here he spent a month in central Asia in the aftermath of the 9/11 attacks and the subsequent invasion of Afghanistan.

The start of 2002 saw him take up his post as bureau chief for ABC News in Jerusalem. He was to spend the next nine years there. He endured the worst of the second Palestinian Intifada, with repeated suicide bomb attacks and the increasingly draconian Israeli responses to them. He met with Arafat and Sharon, saw the rise of Hamas, conflicts with Lebanon, and served for thee years as Chairman of the Foreign Press Association. In 2005 he became ABC’s Middle East Correspondent responsible for reporting to all of the network’s daily broadcasts and digital outlets. His range of coverage included Jordan, Syria, Lebanon and Egypt.

For much of his time in Jerusalem he served as chairman and board member of the Foreign Press Association, working to defend the interests of over 400 journalists working for the foreign media in Israel and Palestine.

In 2005 he married Iris Boaz from Jerusalem and they started a family with Ben arriving in March 2006 and Mia in December 2007.

In December 2010 they all came to London and their house in Teddington. Simon forged a close working relationship with Al Jazeera English as a correspondent based in the channel’s London office. He spent much of his time on the road, travelling in Europe for breaking news, EU summits, features about Romania’s Roma, Spain’s economic woes, the ongoing unrest in Egypt with spells of bureau duty in Paris and Jerusalem.

From October 2015 Simon has been working full time for TRT World as a London correspondent, covering the UK and Europe. TRT World is a new English language new channel with headquarters in Istanbul.

In 2012 he made a BAFTA nominated documentary on the Isle of Man TT as part of Al Jazeera’s “Correspondent” series. It remains one of Al Jazeera’s most watched films. A former amateur racer, motorcycling remains one his great passions and he is a regular rider at track days in the UK and Europe.