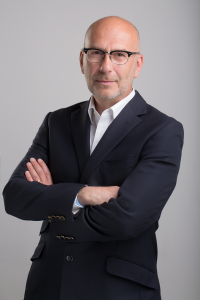 Simon McGregor-Wood is a television news correspondent with 30 years experience in broadcast journalism. Currently he is based in London working for TRT World as Europe correspondent. He is a stylish writer and presenter with a reputation for being calm under the pressures of deadline.
Simon began his career with ABC News. In an eighteen year association he worked as a senior News Editor in London, a producer for World News Tonight and as correspondent in the Middle East based in Jerusalem.

He returned to the UK in 2010 where he continued to report for ABC News while forging a working relationship with Al Jazeera English. He travelled throughout Europe covering terrorist attacks, the ongoing economic crisis and the growing tensions within the EU.

In 2012 Simon presented his own hour long Al Jazeera Correspondent film about the Isle of Man TT races, A Dangerous Addiction (watch here).

In 2015 he joined TRT World as its Europe Correspondent.