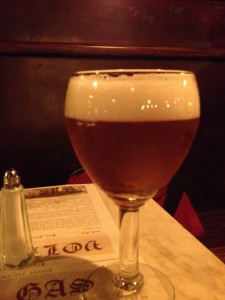 It was the 32nd Russia-EU Summit and one held against the backdrop of deep disagreements over Ukraine’s future, and the future of Europe’s eastern partnership strategy.

The EU Commission building in Brussels was under tight security. There were far fewer journalists present than for the regular EU Leaders’ summit, but dozens of Russian journalists were there. This was normally a two-day meeting, with a dinner and working groups. But such is the tension over Ukraine and other emerging differences EU leaders reduced it to a three-hour meeting over lunch.

One EU official explained that the idea was to make it clear to the Russians, it was not business as usual.

So paranoid was Russian presidential security that before Putin and his hosts Barosso and Van Rompuy made their way to the press conference, the large atrium where live camera positions were set up, had to be completely cleared of journalists. I’m not sure if this has happened before, and certainly it hasn’t during EU leaders summits when leaders walk through the crowded area teaming with hundreds of journalists.

Everyone in the building is accredited and screened, and besides, this was the EU HQ, and Putin was a guest. Does Barosso get to dictate media access rules when he visits the Kremlin, we wondered. Probably not. The phalanx of Putin’s bodyguards, shielding their boss, left you in no doubt of where they were coming from on security.  But this wasn’t a public space. All part of the theatre I suppose.

Lots of diplomatic language used in the press conference, but the frequent use of the word frank, to describe talks, leaves us no doubt that things are frosty. Putin’s body language is self consciously macho during these events. Legs wide apart. Lots of peculiar facial contortions, and no effort to hide smirks and shakes of the head when his hears something he doesn’t agree with.

One note about Foreign Minister Lavrov – quite the enforcer, despite the elegant cut of his suit. Minutes before the press conference he and his security detail swept through the atrium, and straight out of the building. Fag break in the frigid Brussels winter air. Given Russia’s recent legislation against so-called gay propaganda, by fag, I of course mean a cigarette.

This is a very attractive traditional Belgian brasserie with great food, good selection of local beers and an interesting local crowd. Reasonable prices.